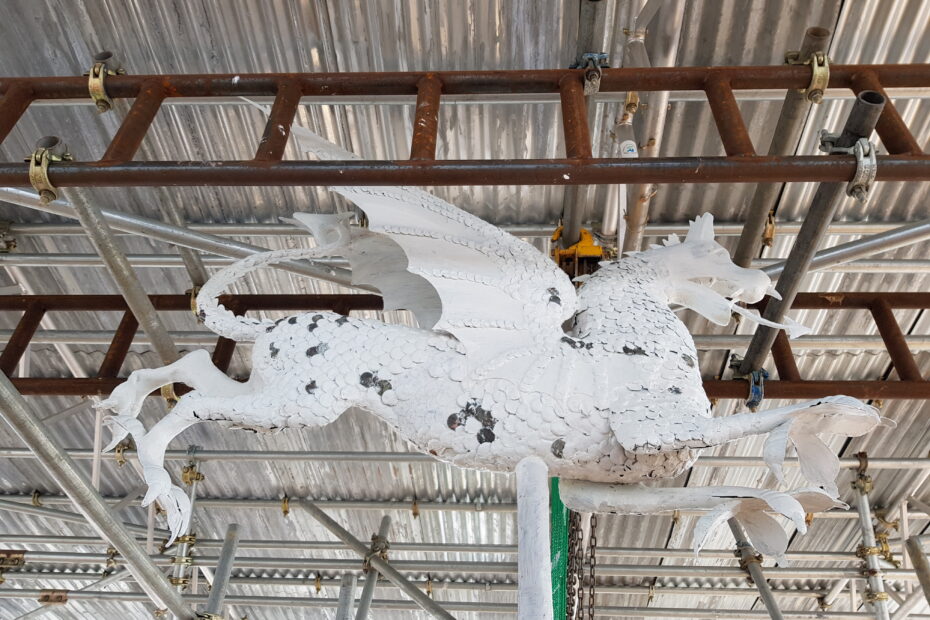 The Caledonian Clock Tower was the centrepiece of the metropolitan cattle market which opened in 1855. The substantial dragon that tops the weathervane was stripped of previous coatings prior to our arrival, as a result of which some scales had been lost and many that remained were loose. While the copper structure appeared stable, there was some splitting of the seams. One clawed toe was entirely detached and had been kept in storage for some time, as a result of which it retained evidence of the original gilding and lacked the brown coatings that had been added later. This meant a likely date for its separation could be extrapolated. This likely date would have been relatively early, possibly contemporaneous with the damage suffered by the scrolls on the cardinal points. An endoscope was used to explore the inside where it was clear that there was no ferrous armature supporting the body.

The work carried out on this object included removal of loose scales (with original positions carefully noted), the whole cleaned and primed prior to re-fixing the old scales and introducing new ones made to fit on site. Gaps around the scales were all filled with mastic to prevent water ingress and to provide a sound substrate for the gilding. The toe was reattached using tabs and rivets, as given its position this was the least invasive and risky process available that gave the strength needed.